Even though it seems like every other comic book series out there right now is getting a movie, apparently Y: The Last Man won’t be one of those according to SlashFilm…which totally sucks!

I got excited a couple of years ago when Dan Trachtenberg tweeted he was going to direct the Y: The Last Man movie. But after that tweet we didn’t hear anything about the movie, well until now. And what we’re hearing is that the movie is dead, because New Line Cinema doesn’t have the rights to it anymore.

Boooo. Y: The Last Man is my all time favourite non-superhero graphic novel. Not only does it have a super interesting premise, with all the men on the planet dying except one man and his male pet monkey, it also had something to say. It was more than just another dystopian tale. It had something serious to say about the human condition whilst balancing a constant light and funny tone. 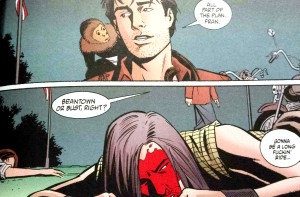 Like I said about the potential Suicide Squad movie this movie wouldn’t have just been another superhero comic book movie, because it’s not about superheroes, it’s about an unlikely hero, who really didn’t end up being the hero of the comic book anyways. It would have added great diversity to the comic book genre and would have given us a movie unlike anything else we’ve seen before.

But in saying that I never really wanted this comic book series to become a movie. I would have totally loved this to become a tv mini series on something like a HBO. I feel like putting all of the 60 issue series into a couple of movies wouldn’t have done it justice. There are so many threads to this story. So many important character moments that all work towards the greater themes the novel explored. My fear was that instead of trying to stuff all the great story into a movie, the makers of the movie might have just gone instead for the easy route and just made this into another dystopian flick with lots of blood and gore and naked chicks, but no real story (unless you’re into that kind of thing).

Now that the writer Brian K Vaughn has the rights to it again, the chances of it even becoming a tv mini series seems pretty dead as well. Why? Because of Under the fucking Dome. Yep. Brian K Vaughn was the showrunner on there (before he quit to write more comics) and i’m pretty sure he’s scarred for life by that experience. It’s pretty clear through some of the comments he made, he wasn’t happy about how the supposed mini-series (which totally isn’t a mini-series anymore even though it should have been) turned out.

I reckon he’s happy to stick with what he knows. Writing comic books. Which isn’t so bad at the end of the day. But just the thought of how freaking amazing a Y: The Last Man movie could have been makes me sad to know that we will probably never see this come to the live action light.

So what do you think? Did you want to see a Y: The Last Man movie? Let me know!