The Flash Episode 4: The beginning of the Rogues

So in my opinion, this was the best episode of The Flash we have had so far. The previous episodes have followed the very good formula of ‘freak of the week’, and it worked. But now it’s time to start expanding the universe and introducing longer story arcs. Episode 4 did exactly that and more, with some really great character moments, episode 4 of The Flash managed to keep a smile on my face the entire episode.

So once again the episode starts off with Barry’s narration to the audience. We get a fun scene of him multi-tasking but then it’s down to business. In comes Leonard Snart aka Captain Cold! For those who don’t know, Captain Cold is one of The Flash’s most famous villains. He is a blue collar criminal with a strong moral code and a strong sense of leadership. He isn’t just another crazy, he likes to be prepared and follow his pre-determined rules, for a smooth criminal mission. He’s the leader of the group of Flash villains known as ‘The Rogues’ and in the current new 52 Captain Cold was seen as a hero after the events of Forever Evil and is now (with Lex Luthor) a member of the Justice League. Clearly this character is more than just a one episode guest star. We will see him return!

The scene that played out between The Flash and Captain Cold played out just like a panel in a comic. From their dialogue to the visual effects of Flash’s super speed, it’s just really amazing to watch something like this on a network television show.

But Captain Cold wasn’t the only guest star of The Flash episode 4, everyone’s favourite gal pal Felicity Smoak also made an appearance. Her appearance showed us that the women in male superheroes’ lives do not have to be stupid damsel in distresses, but can be so much more than that! I’m glad they kind of turned off any romantic implications between the two of them by the end of the episode, because yes a girl can have more than one superhero crush, but 3 (Arrow, The Flash, Ray Palmer-The Atom) well that’s kind of pushing it. Besides we all know where Barry’s heart really lies. 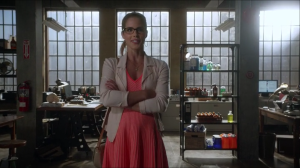 The Flash’s support team, mainly Cisco, also had great moment’s in tonight’s episode. We find out that it was Cisco who had made Captain Cold’s gun, leaving The Flash feeling a little betrayed. Almost like how Batman has created a plethora of weapons to defeat Superman, even though they’re friends and he trusts him, Cisco had created a weapon to stop The Flash just in case he needed to be stopped. The Flash gets pissed off and wants to complete the mission on his own, but of course after the wise words of Felicity, Cisco and team realise that they need to always have Barry’s back, no matter what, even if it’s just with a vacuum cleaner!

Anyways this was a really great episode which great character moments and a fantastic villain. As the dynamics continue to shift in the team we see Harrison Wells drop his friendly exterior with some harsh and threatening words being chucked at Cisco. Wells will obviously not have anyone screw up his master mysterious plan. And of course that final scene between Captain Cold and a mystery man (who we all know is Heatwave) finally starts giving us an idea of the direction this show is going. I presume by the end of the season we will have a nicely formed Rogue’s team with Captain Cold as the leader. It will be interesting to compare that team dynamic with The Flash’s team dynamic.

And unfortunately we won’t get to see anything until November 11 when The Flash returns. But until then if you’re a comic reader then you can check out The Flash Season Zero digital comic.

So what did you think of the episode? Are you excited to see the Rogue’s team starting to develop like I am? What other members of the team do you think should join (I’m hoping for Captain Boomerang)? Let me know!