So yesterday we got an extended preview for Agent Carter, which clearly highlighted the show’s promise. I’m liking this trend of really showing strong women (both physically and mentally)  in the live action comic book world. This espionage mini-series is a great way to fill the gap in between Agents of Shield, and to provide a really exciting story in a part of the Marvel Cinematic Universe that we haven’t seen as much of. We’ve already seen plenty of ass-kicking superheroes, now it’s time for ass-kicking female spies!

Like I said I’m loving this move towards showcasing strong women in these comic book properties. Wonder Woman and Captain Marvel are years away, so until then we got Agent Carter. Now to be honest with you I wasn’t all that excited for Agent Carter when they first announced it, but after seeing this preview, reading the synposis and the little bit she was in Agents of Shield, I think this show is going to really keep me going in January.

In the synopsis they really stress the fact that because the show is set in 1946 it’s going to be dealing with Peggy whose trying to find her place in a male-dominated world again. Of course people would just love for her to sit at a desk and do administrative work while the men are out on the field, but that’s not what she’s about.

We definitely see in the preview that Peggy isn’t one to sit idly by as the world passes her. She wants to play her part, and that is what this series will be highlighting. The fact that this show is only limited to 8 episodes is really great. A lot of network TV shows with 23 episodes often find themselves dragging their feet to fill up time. You’re left with boring filler episodes and slow moving story lines. With this 8 episode show we can expect a nice quick pace, and a nice solid story that has the space to be adequately developed, whilst not being forced to drag out to fill up time.

In the preview we get a glimpse of Howard Stark enlisting the help of Peggy. As the synopsis stated Stark is being framed for unleashing deadly weapons to anyone who pays up, now he and Penny must track down those who are actually responsible and collect the weapons to clear his name. I thought Stark would have a bigger role in the show but the preview implies that he will only be in the show for a few minutes before he leaves, leaving Penny and Jarvis to collect some of the weapons.

Which is fine because obviously the focus on the show is Penny. I love that the preview started all nice and calm, Penny is dressed lovely and looking like a real classy lady. She has a quick chat to Jarvis and then bam! They cut to a fast paced 20 second clip of her being a total bad-ass. This further exemplifies the point that Peggy is not someone to underestimate. For new viewers who aren’t aware of Agent Carter’s character in the cinematic universe, this clip really awakens them to the fact that she may seem like a normal nice lady, but she is in reality so much more!

Speaking of Jarvis, the preview gave us a little tease of what their dynamic will be like in the show. As Jarvis says, he is a very timely man and has a set routine every night, in which he goes to bed at nine. However as he also says he is no newbie to to the espionage world. This unlikely pair will sure to have a really fun dynamic in the show, as they are both individuals you wouldn’t expect to be total bad-asses, but they actually are! 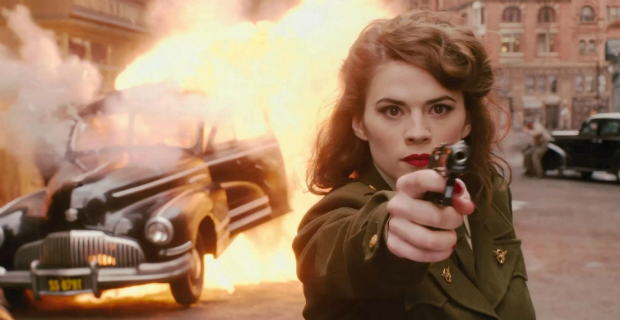 Right now the story line seems simple enough, but I expect that, considering it’s a show about spies and we know Hydra is present in that world, we will see a lot of plot twists and turns, really showcasing just how much Agent Carter can handle.

Agent Carter is looking really promising, and with the great world the Marvel Cinematic Universe has already set up, it will be really interesting to see how it all began. I’m hoping we don’t have an Agents of Shield situation where the show is really slow to start off. That probably won’t happen as Agent Carter is only limited to 8 episodes, therefore they won’t really have any choice but to jump straight into the story. And of course it will be interesting to see how they comment on the issue of gender roles during this time period. Agent Carter will probably piss off a lot of people on the show who think she should be sticking to the role society has given her after the men came back from the war. And of course if she gets caught going on these missions for Stark she could end up in prison (unlikely though).

So overall this was a great preview that helped to really build up my excitement for the show. Are you looking forward to Agent Carter? Let me know!