So I have a little obsession with Jake Gyllenhall, and after watching Nightcrawler that appreciation I have of him was further cemented. And with all the high caliber actors joining comic book films, I’m thinking it’s time for Gyllenhaal to join one as well. He was so close to being Spider-Man in Spider-Man 2 before Tobey Macguire came back to reprise the role, and he was a close contender to play Batman for the Nolan movies. Thing is, if Jake Gyllenhaal is going to be in a comic book film, he shouldn’t play a superhero. Yeah he’s got puppy dog eyes, but playing a villain will really showoff his acting strengths.

So I’ve been a fan of Jake Gyllenhaal for a while, ever since he moved away from trying to do big blockbusters (cough Prince of Persia), into doing more character driven dramas. Films like End of Watch (directed by Suicide Squad director David Ayer), Prisoners and Zodiac really proved that he had the talent. But films like Nightcrawler and Enemy proved he had a real creep factor, which would be perfect if he were to play a dark villain.

When the rumour about the Joker set to be appearing in the upcoming Suicide Squad surfaced, many people suggested Gyllenhaal should be cast (but of course the main rumour is that Jared Leto is the Joker). I mean I could definitely see him playing that character really well, but with the Joker, he just acts plain crazy. Gyllenhaal is better at playing creepy subtly, not as full on as the Joker persona. Let’s look at his performance in the film ‘Enemy’ for example (and if you haven’t seen Enemy yet and you enjoy smart mind-boggling films you should definitely check it out). 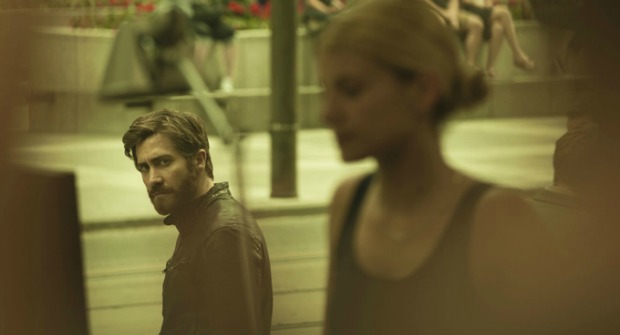 So I don’t want to spoil Enemy for anyone who hasn’t watched it yet, because it’s the type of movie you should watch without really knowing anything about it. But basically in Enemy he played two characters. And just from the opening shot of the film the creep factor sinks in. But the characters he played in the film aren’t just straight out creepy. They seem pretty normal throughout the film at times. But then at times you get a scene and you see the intensity in Jake Gyllenhaal’s face (as seen in the still above) coupled with his character’s questionable actions and you have to do a double take on what you initially thought about the character. The characters he played in Enemy were real enigmas. You don’t really know what their motivations are until the end of the film, and as you gather more information about these characters, the more creepier they seem. It was a build-up of creepiness that Gyllenhaal played perfectly. But I’m speaking in vague terms because I reallyyyy don’t want to spoil the movie, it’s so good!

Another movie that recently came out that showed me Gyllenhaal could really play a cool dark villain in a comic book film is Nightcrawler. Basically in Nightcrawler Gyllenhaal perfectly portrays a guy with no sense of empathy with humanity. The character is however very smart. He has aspirations, and really tries to be the best person he can be, the thing is he doesn’t really know what this ‘best person’ is. He’s clearly very disconnected to reality, and has a warped worldview.

A major theme of the film is the perception of reality. And Gyllenhaal’s character’s perception is particularly interesting. He doesn’t care who he hurts or what he does. He is the master of manipulation, but his demeanor with other people is rather calm and polite. He also always gets what he wants through those traits, and the way Gyllenhaal portrayed that character really showed me that he would be perfect playing a cool, calm, smart villain in a comic book film.

The thing with Jake Gyllenhaal is that although he can play creepy, he can also play lovable. So this got me thinking. Perhaps Jake Gyllenhaal should play a villain who kind of has two sides. One side is lovabale, the other cold and calculating. And because I’m such a Batman fan, of course my train of thought goes to Batman villains, so why not have Jake Gyllenhaal play Hush!

For those that don’t know Hush is Tommy Elliot aka Bruce’s only real childhood friend. He grows up to be a really great surgeon, and also a really great psycho. He acts all nice and friendly to Bruce Wayne’s face, but behind his back he is secretly plotting his destruction. This is a character I could definitely see Gyllenhaal playing. The thing with Tommy Elliot is that you get hints along the way that he isn’t quite right in the head. And it’s that build up of his creepiness that really makes his character great, because he doesn’t just seem flat out crazy the first time we meet him. And that subtle creepiness is what Gyllenhaal is really great at playing. And oh boy would I love to see a fight between Affleck and Gyllenhaal. Hush is smart, calculating, and has a warped worldview. And if you’ve seen Nightcrawler then maybe you too could see Gyllenhaal playing Hush (if you wanna know more about Hush, you can read about his character here).

Anyways what do you think about Jake Gyllenhaal playing Hush? Or do you think there’s another character he would be better suited to play? Let me know!