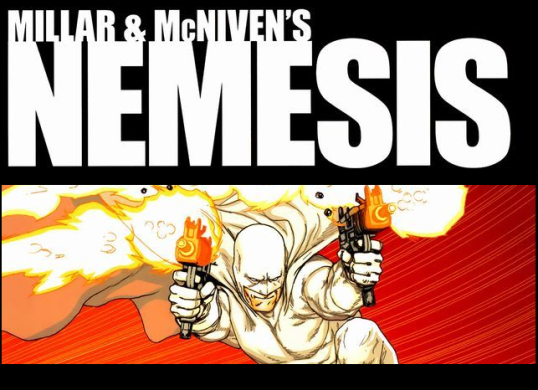 Rich, bored and highly intelligent? Why not become a supervillain! After the success of Kingsman: The Secret Service, it’s more than likely that Mark Millar’s other comic book property, ‘Nemesis’ will become a film, which I think is pretty awesome. But before the movie, let’s get into a discussion of the Nemesis comic, and why the comic could translate into film very well.

Spoilers follow for the Nemesis comic (please read this after you’ve read the comic, because you really don’t want to know all the plot twists and turns before you read the comic…final warning).

After the financial and critical success of the R rated Kingsman: The Secret Service (which is great btw for all those of you who haven’t watched it yet), the conversation has landed on what Mark Millar’s next comic to screen adaption would be, and the answer is pretty much ‘Nemesis’.

Basically Nemesis takes the concept, ‘what if Batman got bored and decided to be a supervillain instead’. Nemesis follows the story of a bored billionaire, who decides to target cops from around the world. His endgame however is to target one particular cop in D.C., Blake Morrow.

Sounds simple enough, but here’s when things get interesting. We know Nemesis is highly intelligent and trained, and also has the wealth to back those skills up. Throughout the comic we’re made to believe that Nemesis is Matthew Anderson. His origin story is pretty simple, Blake Morrow was the cop that stopped his parents’ criminal activities, which resulted in their death. Anderson then vows to ruin the life of the cop that ruined his life. Very straight forward stuff.

Blake Morrow, of course is ‘Oprah’s favourite cop’, that’s how good he is. Like many cops in his position, he has a hard time with his family, often putting work over family.

Again very straight forward, and cliche. But what’s interesting is that we find out Nemesis isn’t Matthew Anderson, that was just an identity he assumed. In fact we never find out who Nemesis was. No motivation, other than the fact he was rich and bored. Morrow was targeted because he was a great opposition. Nemesis tested Morrow’s commitment to his family. And in the end we find out Nemesis was just one of many supervillains created by a company. This company helps bored rich people, fulfill their dreams of becoming supervillains. So although in the end, Nemesis was stopped, soon there will be a new supervillain, created by this company.

Now how awesome is that? The comic has been criticized for it’s one-dimensional characters. Nemesis doesn’t have the psychological complexity of Batman, as we don’t know what his motivation and origin story is. But Nemesis is still a great character, because he is so ruthless and scary. The fact that he is just some rich dude that was bored, is great. It’s completely terrifying that a person with the resources he has, can decide to one day become a supervillain, because he was bored.

As for Blake Morrow, yes he is a little cliche. But the comic really test the tropes that comic books often present. Obviously Nemesis is looking particularly at the Batman mythos. Blake Morrow is a Jim Gordon type character. Morrow is presented as this hero cop. A family man, a religious man, and a man who can stop just about any criminal. However behind closed doors, there is a lot more going on. A cheating wife, homosexual son which for some reason people think is scandalous and a daughter who had an abortion because she didn’t want to upset her father.

And Nemesis uses that to do some pretty messed up things, things you would probably never see in a Batman comic. Because that is what the Nemesis comic is about, taking that world and putting it to the extreme. So perhaps the characters aren’t as fleshed out as they should be. But the purpose of the comic is to present this insane world, with these insane characters, and showcase the extremities of what occurs between your hero and villain.

It’s a story of heroes and villains, and how they aren’t always what they seem to be. We always expect the villain to have some kind of tragic back story. In this case, we don’t know, we just know he was rich and bored. We always expect our hero to figure everything out, and for everything to be fine. In this case, the hero continually gets tricked until the very end, when he finds out that even though Nemesis is gone, there is a company out there that will now go on to create the new Nemesis (and having to deal with all the other repercussions of Nemesis’ actions).

And it is because it takes the tropes of your classic Batman story, and turns it upside down, that makes Nemesis such a great comic.

The Nemesis movie has been in development for four years now. It’s gone through many stages, however it appears that this movie will probably happen now. The script is completed and Joe Carnahan is set to direct. Millar stated that the likelihood of a Nemesis movie, hinged on the success of Kingsman, and thankfully that film has been a success, so things are looking good for Nemesis.

The comic is cinematic in scope. The large panels and quick pacing is perfect for a film adaption. And within the current popularity of superhero films and well…Batman, I’m sure this backward superhero tale will be very intriguing to many people. However here is the problem, this comic is incredibly gory and shocking. I’ve read a few reviews of this comic online, and many people have been offended by this comic. Me personally, I’m not really phased by things like that, but I can understand why some people would find certain moments in this comic shocking and distasteful.

People were even offended by Kingsman, with its violence, and the final scene of the movie (you know the one with the Princess…). Basically if the Nemesis film was to be made, they would have to do it on a low budget, because there is no way this is going to attract the mainstream audience. If the movie follows the same plot points as the comic, there will probably be some kind of uproar on the internet, but at the end of the day, you can’t please everyone, and this comic isn’t for everyone.

I like that the comic pushed the boundaries, and wasn’t afraid to be a little shocking. You could say it’s ‘bad taste’, but if we don’t allow for storytellers to push the boundaries a little, we will end up with the safe, formulaic superhero films, critics have been whining about for the last couple of years.

Anyways if you aren’t one to get easily offended, then I think you should get very excited for the potential Nemesis movie.