Arrow season 3 episode 16 picked up where the last episode ended, with Ra’s making the ‘offer’ to Oliver. And you know, maybe it’s not so crazy, maybe Oliver Queen should ditch the Arrow and become the next Ra’s Al Ghul. Because in a world with The Flash and billionaires with flying tech suits, Queen needs to keep up. So let’s discuss Arrow season 3 episode 16!

Good old Ra’s Al Ghul has sent poor Oliver in a crisis over his identity. What has he accomplished as the Arrow? Because I don’t know if I could say Starling City is any better than the time before the Arrow. But to be fair, Gotham will always be a terrible city even with Batman, so sometimes there’s only so much you can do.

However in a world where a guy can run so fast he can travel through time, Oliver Queen may need to start upping his game. So I’m glad that he is genuinely thinking about what he can do to actually implement long lasting change in his city. And becoming the next Ra’s Al Ghul could give you the resources to do that. You have an entire League of Assassins and a pool of immortality, sounds good!

Of course the goals of the League of Assassins and Oliver probably don’t line up very well. The League think they can improve the world by causing mass death of the population, that really isn’t Oliver’s style right now.

And Ra’s isn’t exactly one to take rejection so well, as we saw at the end of Arrow season 3 episode 16. So why did Ra’s Al Ghul dress up as the Arrow? First of all Ra’s’ costume is way cooler, so it has nothing to do with that, but more to do with turning the city against the Arrow. Oliver wants to do everything he can for Starling City, however if word gets around the Arrow is this ruthless killer, it will turn the city against him, then what can he do? Oh I know, maybe become Ra’s Al Ghul! 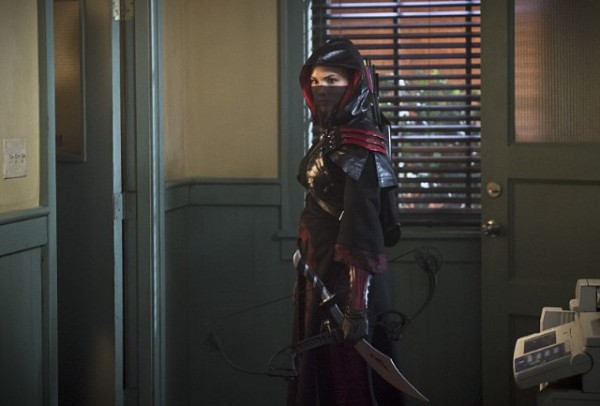 So apart from the growing relationship between Oliver and Ra’s, another has started forming, Nyssa and Laurel. Laurel is still a shitty fighter, so she needs someone like Nyssa to help her out. The pair of them bonded over their father issues, and I think they can really help each other grow as characters. I have to say Laurel did not annoy me even once in this episode, so maybe now with her new Nyssa friendship, she can truly become the Black Canary we know and love.

Speaking of forming relationships, Ray and Felicity, Thea and Roy, love is in the air! Except for Oliver that is aww. I don’t mind either of those pairings, I just hope they don’t overly push the whole Ray/Felicity/Oliver love triangle thing. Look I know, it’s not a CW show without a love triangle, but let’s stay focused on the justice okay.

Overall Arrow season 3 episode 16 was another great episode, that really showcased how well developed so many of these characters are. Episode 17 is bringing back the Suicide Squad, which means the return of my favourite, Deadshot! Oh and I guess we’ll find out why Shado isn’t dead either, wow people have a hard time staying dead on this show hey.