Look closely, look at his eyes, and you will see two very different sides in this official image of Lex Luthor from Batman v Superman. The left side looks evil and menacing, whereas the right side looks sympathetic and almost frightened. So let’s discuss the duality of Jesse Eisenberg’s Lex Luthor!

There’s been a lot of speculation surrounding Jessie Eisenberg’s portayal of Lex Luthor in the upcoming Batman v Superman movie. Would he just be like Mark Zuckerberg 2.0? Would he be bald? Would he be like Gene Hackman Lex? Maybe more like All-Star Superman Lex? And now we have some kind of idea of what type of Lex Luthor he will be from this image.

At first when I saw the image, I can’t say I was overly excited. It was Jessie Eisenberg bald…cool. But then after looking a little more closely at the picture, you can see that there was more of a reveal than we thought about at first. Jessie Eisenberg has two very distinct facial expressions in this image on the different sides of his face. Here’s a better look: 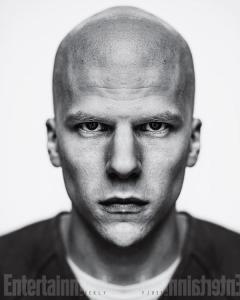 So what does this duality of the image say about what type of Lex Luthor we’re going to be getting in Batman v Superman? It makes me believe that we won’t get the boring, mustache twirling Lex Luthor we sometimes get. You know, evil just because he’s evil. Boring motivations like wanting more money etc. From this, I’m guessing we’ll be getting a Lex Luthor that is a little more complicated than that, which I like.

In Zack Snyder’s interview he went on to say that this version of Lex Luthor “says what he believes and he says what’s on his mind. If you can unravel the string and decipher what he means, it’s all there.”

I’ve always liked the idea of a Lex Luthor who hates Superman because he believes he is a danger to natural human progression and evolution. Which he uses as an excuse on the surface, but really he hates Superman as he poses a threat to the self-image Lex has constructed for himself. Lex views himself as the peak of human condition, the example that the rest of humanity should strive to be. But then here comes this perfect alien who may actually be a better example than him, which he doesn’t like.

Lex Luthor is best written when he genuinely wants to help humanity, in his own twisted way. Where he views himself as the good guy, and Superman as the bad guy. And this image captures the essence of that type of Lex Luthor.

And yes, it’s only an image, and there is only so much you can gain from it, but this dual image, along with Snyder’s comments, allude to the portrayal of a Lex that isn’t just the cliche bad guy we often see.

Anyways each official image release of Batman v Superman have been pretty interesting, so I’m definitely looking forward to the first trailer…which will hopefully premiere at WonderCon *fingers crossed*.