In another great episode, The Flash episode 17 moved the story along quite nicely with the formation of the anti-Reverse Flash team. Oh and a familiar laugh was the villain of the week (I am your father whaaat!). So let’s discuss The Flash episode 17!

First of all, Mark Hamill was awesome in The Flash episode 17. Hannibal Lecter style, he sat in that prison cell with his beautiful Joker-esque maniacal laugh. In a fun nod to the 90s Flash TV show, it was great that they brought the old Trickster back, along with the new copycat. Also gotta love those Speed, Breaking Bad and Star Wars references!

But even with Mark Hamill in the episode, the character of Harrison Wells and the story surrounding him is still the best parts of the episode.

The growing tension between Barry and Harrison is great. Wells is getting a little suspicious with the cold shoulder Barry has been giving him, but luckily Barry knows how to fake a smile well enough to shake off any suspicions.

Barry of course is now full force on the anti-Reverse Flash brigade. Him along with West and the distant relative of the Reverse Flash, Eddie Thawne, are now all teaming up to uncover the truth about Wells.

I’m liking this little trio they having going on, and of course it’s great that Eddie knows who The Flash is. Although the whole not telling Iris to keep her safe is stupid. I don’t know why superhero stories always think it’s better to not tell the female characters jack shit to keep them safe, because it doesn’t work. Iris isn’t stupid, and I’m sure she’s going to figure out that this little trio is up to something. So just tell her! At least Eddie has some common sense, and doesn’t think it’s the best idea to not tell Iris.

The Flash episode 17 further dug deeper into the history of who Eobard Thawne is, and why he is Harrison Wells now. The opening fight scene between The Flash and Reverse Flash was really well done, and I’m constantly amazed at the visual effects the show has.

Thankfully Barry, being the smart one he is, pretty much knows Wells is the man in yellow. The final confrontation between the pair is going to be beyond amazing. 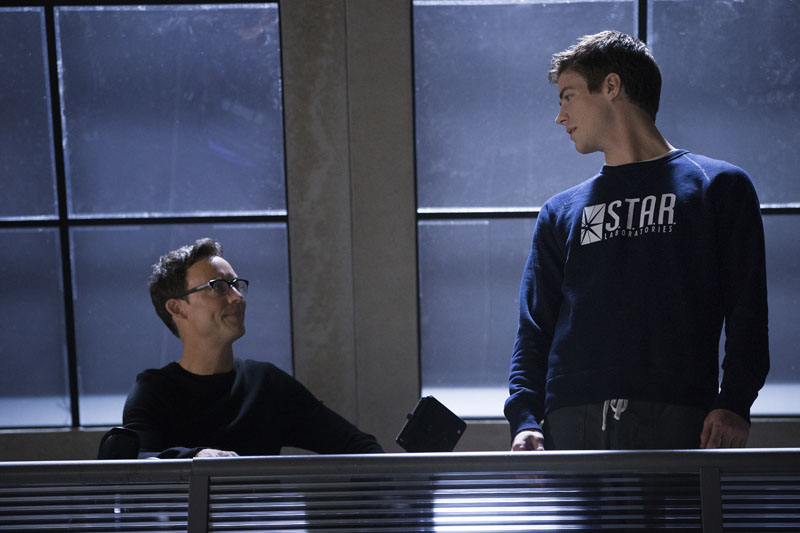 Unfortunately there is no episode until 2 weeks (gotta love those network TV show breaks), but we did get to see a preview of the finale. Yes you did see that right, the footage showed Oliver Queen in the Ra’s Al Ghul suit, and FIRESTORM fighting alongside Barry, to take down Reverse Flash.

Overall The Flash episode 17 continues to impress, and the complex relationship between Barry and Wells is so intense to watch. I have to say that the first season of The Flash, has made me enjoy the show a lot more than Arrow right now, so let’s hope it keeps the momentum!