What’s going on with the new Superbro-I mean, Superman?

So if you’re a DC reader, then you probably know come June, DC are going to be changing things up quite a bit with their current line-up. This will include a major change in status quo for Superman, and although change can be good, what the heck are they doing? Of course we can’t judge this change to Superman’s character until after we read some full comics, but from the previews and information we have read, I don’t know how this is going to go.

The big change coming for Superman is June is two-fold: he will no longer have a secret identity, and his powers will be heavily limited. With that also comes a costume change and a haircut. Here’s the thing, change in comics can be good and is needed. When you’re looking at a character like Superman, who has been around for over 7 decades, you need to change things up so that you’re not telling the same, slightly altered story, again and again.

However when changing the character, the core of the character should remain, otherwise what’s the point. When I think about Superman, I don’t think of a high school jerk jock, whose got a lot of angst and anger. I mean sure you can have the occasional episode of Smallville where a teenaged Clark Kent gets infected by some red Kryptonite and then starts wearing leather jackets and riding around on a motorcycle. But in the main continuity of Superman, why would you turn Superman, into this Superbro? 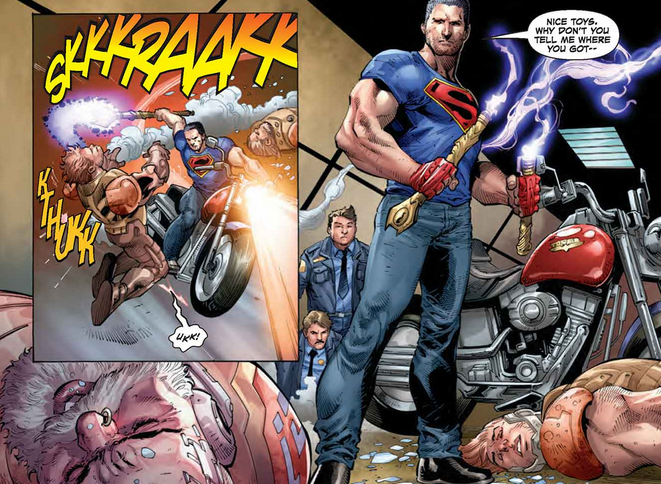 Now from the previews we have seen, we know that Superman doesn’t really have all his powers anymore, hence the riding of motorcycles. He also doesn’t have his costume anymore, because the Fortress of Solitude ripped that away from him, as it didn’t identify him as Superman anymore, because of his lack of powers, hence the t-shirt and jeans. As for the haircut? I don’t know.

But right now we’re just talking about physical appearance, what about his personality? Well in the previews he’s still coming off as Superbro. He’s super angsty and pissed off, and kinda coming off as a jerk.

Now I know poor old Clark is going through a lot right now. Lois Lane revealed his identity to the world and his powers are reduced and his costume is gone. He has the right to be pissed! But let’s not dwell on angsty Superman for too long. Because Superman is at his best when he takes a bad situation and finds a way to turn it into a positive, into an opportunity. An opportunity for growth, an opportunity for something better.

So as I said, I don’t mind changes, as long as they serve some kind of purpose. Gimmick changes piss me off. Change a character so that they grow as a character, not so they become someone else entirely. Stick to the core of what makes Superman, Superman, and I’m all good. 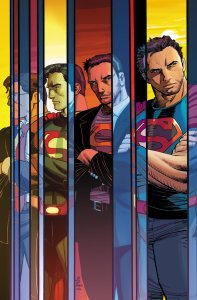 And of course this is the world of comic books, so it’s not like we’re going to get t-shirt and jean wearing Superman forever. I’m expecting we will be back in the costume, at the very latest, by the time Batman v Superman comes out. So for now I guess we’ll have to wait and see what DC plan on doing with Superman, and if it actually serves a purpose and helps the larger story arc of Superman.