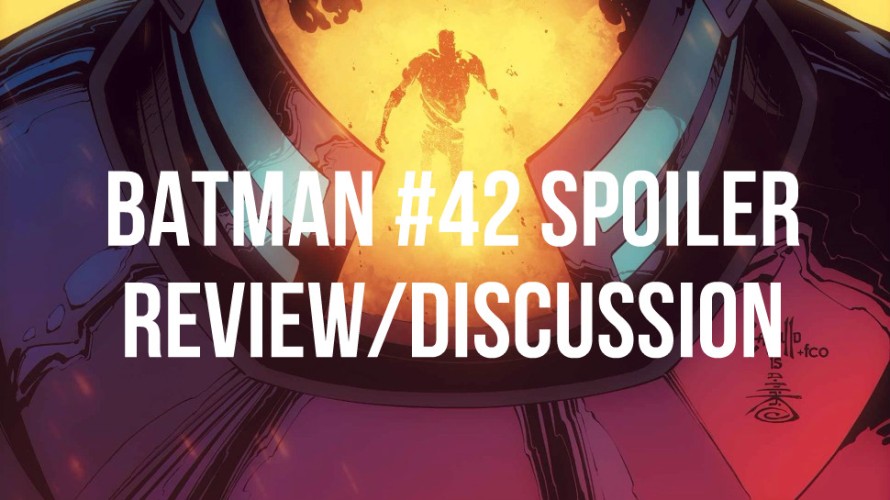 Sometimes you don’t know how much you really love something until it’s gone, and Batman #42 reminded me just how much I love Bruce Wayne. So whilst Jim Gordon tries to define himself as Batman, we find out what’s happened to good old Bruce Wayne. So let’s discuss Batman #42!

Batman is legendary. It’s hard to step into the position of someone who’s built up such a status for himself. When you don’t know the man behind the mask, you view Batman as this amazing unstoppable force, who seems to always know what to do. This is what Jim is struggling with. He’s trying so hard to be Batman, but he doesn’t even really know what that means. He needs to figure out who he is and what he stands for behind the mask, to really be Batman.

Batman isn’t an individual force anymore. He’s works for the GCPD, and Batman #42 explored Jim’s struggle to define himself and his Batman, whilst he’s in such a position. Jim’s conversation with the Commissioner was quite telling, as she went on to lay it down for him. Batman doesn’t exactly call the shots anymore, he receives the information and does what he’s told. But when the original Batman was an independent force for justice who defined his own rules, Jim Gordon’s Batman becomes less Batman and more like just some faceless, compliant robocop. 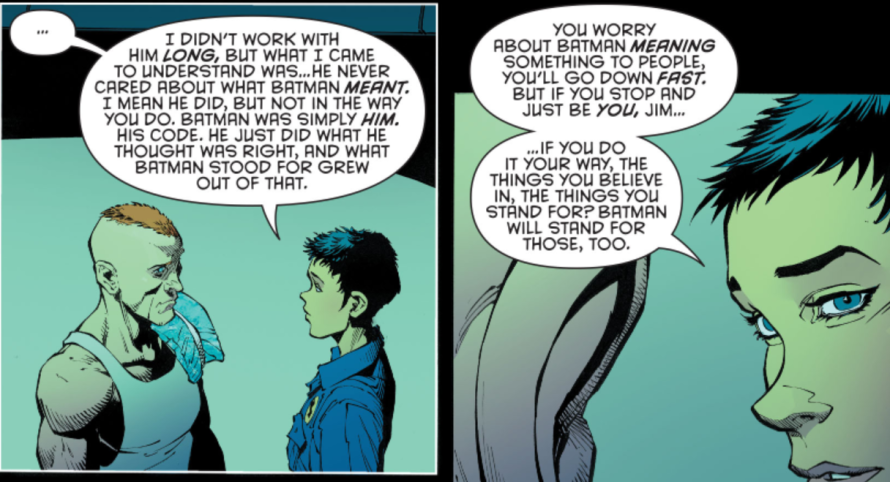 And it doesn’t take until the end for him to realise it’s important for him to express his own individuality. To make his own rules, follow his own values, and let the Batman persona build from there. I mean why throw Batarangs when you’re better at using a gun?

We also get the set-up for the new villain in Batman #42, “Mr Bloom”. This guy places “seeds” on the bad guys, so they develop unique powers, depending on who they are. It’s great that Snyder has created a new villain for this new Batman. Bruce’s Batman villains are often distorted reflections of his own psyche, so it will be interesting to see if Mr Bloom will have any similar traits to Jim Gordon.

Now before we move on to the Bruce Wayne part of Batman #42, I just want to talk about a few things. The $15 million Bat-truck? Awesome. Digital camouflaging? Awesome? Bat-app? Awesome. I love the modernisation of Batman. When tech is such a big part of Batman’s character, It’s only logical that Batman has an app, where people can report incidents. A live-feed of Gotham’s crimes is exactly what he needs.

But now let’s talk about Bruce Wayne. As much as I’m loving having Jim Gordon as Batman for the time being, I do miss Bruce. So it was great to really finally see him again (even though it hasn’t been that long).

It really isn’t a surprise to anyone that Bruce isn’t actually dead. But what exactly is Bruce Wayne doing now? He’s not being Batman, but he’s still helping people, kids to be specific.

It’s interesting seeing him being in his public Bruce Wayne persona, but not acting up as a playboy billionaire, but being this nice, caring person. The way he was acting you could think you were reading Clark Kent, well until he gets all angry and dark again (a great panel by Capullo there) when he spots a “stranger”.

So the question is, why isn’t Bruce Wayne Batman anymore? Well he hasn’t exactly explicitly said why yet, but I think he’s just taking a deserved break. Fighting a monster like the Joker long enough, you can start to become a monster as well. You have to step deep into the darkness to beat a guy like the Joker, and for Bruce, he needed to figure out who he was again after his last battle with the Joker. The Joker really broke him not only physically, but emotionally and mentally as well.

Bruce decides to take a step back from being Batman for a little while to reevaluate himself. Doing something good and simple can help him drag himself out of the darkness the Joker took him into, and find that line that separates Bruce from the monsters he seeks. And even if he’s faking it, it’s good to see Bruce look happy and smile (who’s this new girl ayy). The other big question is, what does Jim Gordon want from Bruce? As far as I know, Jim didn’t know Bruce was Batman. So maybe he wants some Wayne Tech help? Maybe some philanthropist help? Maybe he wants Bruce, an important figure in Gotham, to help promote the new GCPD approved Batman? I guess we won’t know until Batman #43.

Overall Batman #42 was a great issue, that mainly focused on the identity construction issues of Jim and Bruce. Although we still don’t know much about this new villain, I’m just hoping he’s more than just some goofy villain, and uniquely speaks to Jim’s character and psyche. 8.5/10.