Whilst Justice League #42 was more of a moving parts issue, we did get some few cool moments, such as the birth of the Bat-God. Yes all those memes have come to life, as Batman is literally a god now. So let’s discuss Justice League #42!

The issue picks up with Superman and Lex Luthor hanging out. Well not so much hanging out, but more so Supes saving Lex from dying after his sister shot him. This is all we see from the pair this issue, but it’s clear that we’ll be seeing more from this team-up (a future issue will be pitting a “corrupted” Superman against Lex Luthor). How will Superman, a symbol for hope, operate in a place that seems so devoid of it?

What’s interesting is that when Darkseid finds out Superman has come, he’s not even slightly worried. So many people view Superman as this larger than life person, a god amongst men. Darkseid, being the arrogant one he is, merely thinks of him as some mortal, and sends his slaves out to kill him. That’s how little Darkseid thinks of Superman.

That’s what’s so great about Darkseid. He’s so confident about himself, he doesn’t have time for anyone he considers is less than him. And considering he thinks he’s the greatest force in the universe, he doesn’t exactly have a high tolerance level.

We also get a conversation between Mister Miracle and Myrina. Now Myrina Black is definitely an interesting character. She says that she’s the only Amazon that kept fulfilling their original goal, to save the world from war, so she wants to end Darkseid, yet she does this by starting a war…Myrina had a child with Darkseid just so she can use that child against him, cold. Clearly her logic has been corrupted by the intense hunt she has going on against Darkseid. It’s easy to be consumed into the darkness when you hang around Darkseid too long.

Then we get back to the rest of the League who are saved from Grail by Metron. Metron goes on to tell them that there’s no point in trying to fight anymore, the world is going to end either way. And with a war shaping up between two of the most powerful forces in the DC Universe, Anti-Monitor and Darkseid, that’s to be expected.

Of course the League aren’t willing to give up that easily. What’s great about Justice League #42 is that the League seem so inferior to the real gods and monsters appearing in the issue. Outside we view the Justice League like gods, but faced with real gods, you can see that they aren’t perfect gods with all the solutions, they’re a group of individuals trying to do the best they can.

So Wonder Woman (who looks amazing in this issue thanks to Fabok) yanks Metron out of the chair. To stop the chair from disappearing Batman gets on it, and is consumed by it. Say goodbye to Batman, and hello to Bat-God.

Bat-God now knows all there is to know about the universe. All this information in his head cannot be good. He tests the chair out first by asking who killed his parents, which the chair answered correctly. Interestingly enough the second question he asked the all-knowing Mobius chair is, “What’s the Joker’s true name?”. Out of all the questions in the world he could have asked, that’s what he asked.

Clearly the Joker will forever have a huge presence and impact on Bruce’s mind. And the way he responds to finding out the answer, with denial, makes it seem like he knows this person. I doubt we will ever find out the answer to that question, and that’s fine. The Joker works best as a faceless, random monster. But it will be interesting to see how knowing the Joker’s true identity will impact him going forward for the rest of this arc.

So how will Batman/Bat-God operate now that he’s the God of Knowledge? The solicitations for the next few issues make it clear that the rest of the League will become real gods as well, and will be burdened with this new power. Knowledge is a dangerous thing. The reckless hunt for knowledge can be enough to destroy the world, so Bat-God has to be careful. 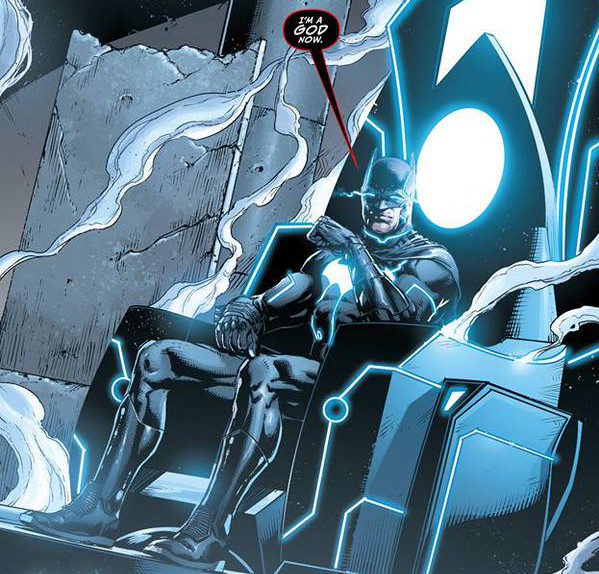 Considering Batman is the type of guy who wants to know everything about everyone and anything he considers a threat, imagine what he will do now that he knows everything. The power of limitless knowledge could really drive an already cynical and paranoid man, insane.

Overall Justice League #42 had some big moments, but it definitely felt more like a moving pieces issue, setting up what’s about to really go down. Witnessing the Justice League become actual gods, and how they handle that power and how it will impact their attitude and relationship with the rest of humanity will be a strong plot point for the rest of the arc. The Darkseid War arc is grand and epic in scale, fitting for the greatest pantheon of DC hereos. Looking forward to what the rest of the arc will bring. 7.9/10