So the rumour is we’re getting a Booster Gold/Blue Beetle team-up movie, and I don’t know about you but this makes me very happy! Sure they’re not the big names of the DC universe, but it shows us two things: one, the DCEU will be diverse and two, the DCEU do indeed have a plan.

Although there has been no official confirmation from Warner Bros as of yet, Tracking Board has reported that WB are making a Booster Gold/Blue Beetle team-up movie, with Greg Berlanti set to helm the film. Heroic Hollywood went on to add that Zak Penn is being eyed to write the script.

But let’s breakdown what the all means; First of all, who are Booster Gold and Blue Beetle? Booster Gold aka Michael Jon Carter is a guy from the 25th Century, who after ruining his football career decides to go back in time and become the greatest hero there ever was. He is constantly looking for recognition and can be a real arrogant son of a bitch. But we love him, because underneath all of that, there is a person with a big heart. Him and his robot sidekick Skeets end up being actual heroes.

Blue Beetle (who Tracking Board suggests will be Jaime Reyes not Ted Kord which is a little weird considering traditionally Booster Gold’s bromance is with Ted Kord)  is a teenager who accidentally fuses himself with alien technology, the Scarab. The technology was supposed to overtake the consciousness of the host to enable the alien society to take over the world, but Reyes manages to keep in control, and ends up using his abilities to be a hero.

Booster Gold and Blue Beetle are known for their constant team-ups in the comics, and have one of the greatest friendships. I’m not sure if Tracking Board are wrong about Blue Beetle being Reyes and not Kord, but we should find out soon. 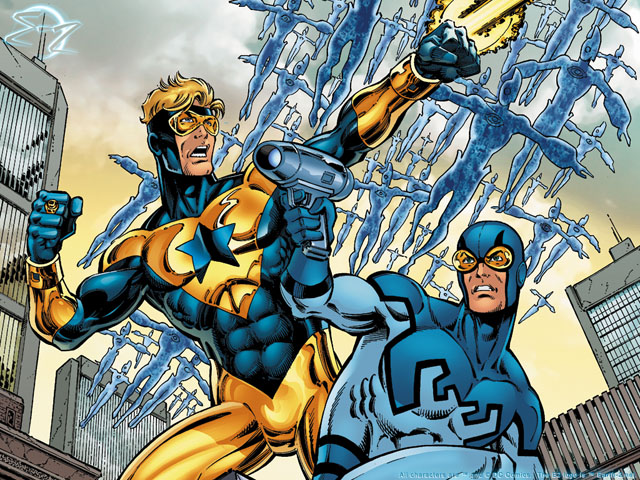 Greg Berlanti who is set to direct is known for his work on DC TV with Arrow, The Flash and the upcoming Supergirl show. The only directing I’ve seen from him was the Rom-Com, ‘Life As We Know It’, so I’m not really sure about his skills in that department yet. But there’s no doubt that he has great knowledge about the DC world.

Zak Penn, the rumoured writer, wrote X-Men: The Last Stand, The Incredible Hulk and Elektra. That of course doesn’t sound too comforting but he also worked on the story for The Avengers and X2 and is working with Spielberg on Ready Player One (however he’s also working on Transformers 5).

Tracking Board went on to say that the Booster Gold/Blue Beetle team-up movie would be a comedic superhero buddy-cop movie. Wait, does that mean jokes in the DCEU??? Yes that ridiculous no-jokes policy rumour can be put to rest.

WB are clearly intent on making a diverse and fresh cinematic universe for their DC films. As I’ve mentioned before, I wouldn’t want all the DC movies to have the same feel as Batman v Superman, because that would be boring. With the Booster Gold/Blue Beetle movie, Miller and Lord working on The Flash and Shazam coming out later, clearly the DCEU will have its lighter additions.

And that’s great! It’s lazy to make all your movies look and feel the same, stretch yourself and create something different for your other movies. This is how you make sure the audience don’t get bored. 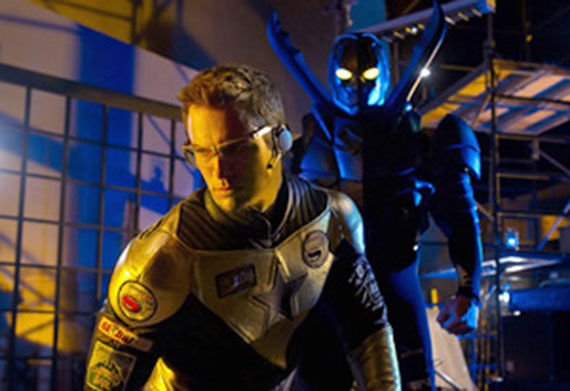 And with the Booster Gold/Blue Beetle movie it shows that WB really do have a plan. A while ago we heard that the producers on Arrow were forced to use ATOM instead of Blue Beetle, like they intended to, because WB had “big plans” for Blue Beetle. Well here are those big plans!

We also heard months ago during the production of Batman v Superman, Zack Snyder talking about Blue Beetle coming into the Justice League. Now that’s also a possibility, with Tracking Board stating that the plan is to put Booster Gold and Blue Beetle in a future JL movie.

So now the question is, when the heck is this going to come out? With the MOS sequel and the supposed trilogy of Batman films also yet to have a release date, it looks like WB are going to be going for 3 superhero movies a year. There were reports earlier that WB were going to release an updated slate of their films, so we may find out the dates for those films soon.

Of course none of this has been confirmed by WB yet, but Tracking Board are a pretty big Hollywood site, so I’m inclined to believe them. And now that I’m super psyched for this movie, it better be true! I love buddy-cop movies and I love superheroes, so why not put them together! The movie sounds like it could be a lot of fun, so here’s hoping we hear official word on it soon!