This episode continued to look at Darhk’s war against Star City, and Oliver and his need to stay out of the darkness. Overall I have to say I’ve enjoyed this season a lot more than the last, but for some reason this episode didn’t do anything for me.

I don’t know, maybe it’s because the same thing seems to happen all the time. There’s an event happening in Star City then all of a sudden bullets are flying! I expect it to happen now. In fact I’m more surprised when there’s an event and no gun fights. There’s no dramatic tension to it anymore.

It’s just another day in Star City, people die and get hurt then they move on. It’s the accepted norm of every episode now, and it’s getting a little boring.

Then you have the main dramatic part of this episode, Felicity getting shot at the end. Did Felicity just die? Well since the beginning of the season they have been teasing that someone major is going to die. This episode implied that it will be Felicity, but no one actually believes this right? (Also kind of a spoiler alert: there have already been pictures released of Emily on set for future episodes sooo). 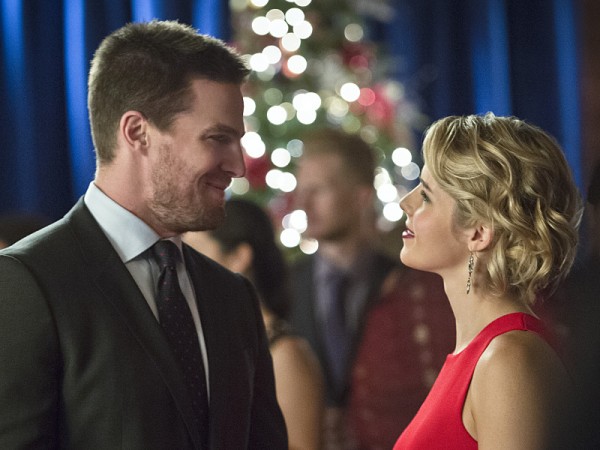 If Felicity did die we would have seen her name on the tombstone for the next episode’s preview, but instead it’s still a mystery. Look if they end up killing her, I will take back everything I said and talk about how gutsy this episode was, but I don’t believe she will. So this whole episode just feels like a build up towards nothingness.

Another one of Oliver’s many loves got hurt. Yes some of them die, like Shado, but then some of them come back as well, like Sara. So here’s the other problem, is death dramatic anymore when death isn’t really a permanent thing in the Arrow universe? Yes people have stayed dead, but death is starting to lose its impact.

I guess it’s only because I’m skeptical that Felicity is actually dead, that this whole episode just felt flat to me. I love seeing Oliver running for Mayor, and I actually love seeing more from Laurel who has really grown on me as a character, but there was just no tension to me in this episode.

Of course there can be a huge follow-up to this episode in the second half of season 4. We know that Darhk is initiating Project Genesis, which involves destroying the world and rebuilding it with the help of cornfields apparently. And no matter who dies I’m sure we’ll see some John Wick level revenge in action. Because I think we know this happy domestic Oliver Queen can’t last forever. The more and more they bring up Oliver’s need to stay out of the darkness and in the light, makes me believe that we will see him fall back into that darkness soon.

Overall Arrow season 4 episode 9 wasn’t as exciting as I had hoped it would be, but it did set up for some great things to happen down the line. I remember in season 2 of Arrow, being so shocked with what the showrunners came up with, now everything is starting to seem a little predictable. I hope they prove me wrong though, and give us something really shocking and great!