After watching this episode, it’s insane to think that this happens in the same world as Arrow. Everything that happens on that show just seems so tiny compared to what’s going to go down in Legends of Tomorrow.

So the concept is simple: Vandal Savage murders Hunter’s family, he decides to go rogue to stop him. To help him out Hunter enlists a group of people, who aren’t legends…yet. Obviously a big part of Legends is going to be these group of people really finding their purpose in life. Even though Ray had a city change its name because of his apparent death, he doesn’t think his life is important yet, nor do the others. Hopefully saving the world will help with their existential crisis (and give Heat Wave some people to kill). 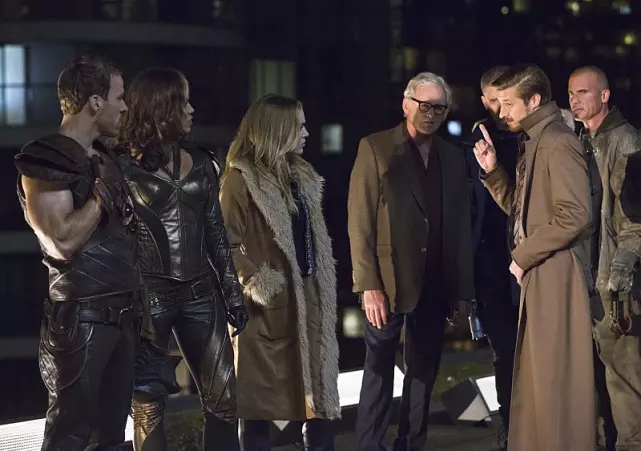 Because we already know all these characters, except for Rip, it’s easy to quickly jump into this world. The team have already started to establish some interesting dynamics. Ray and Martin like to nerd it out together, whilst Sara and Snart like a little chaos.

As a massive Doctor Who fan, I can’t help but geek out over this show about a Time Master, who stole a ship and left his people to travel through time to save the world. The scale of Legends of Tomorrow is huge, and you could definitely sense that from the Pilot.

Compared to Arrow and Flash, Legends seems cinematic in scale. There’s been rumblings that The CW are hesitant to give the show a season 2 because of how expensive it is to produce an episode, but if the show does big numbers, I’m sure they’ll work it out. But hey the cost is worth it, because visually the show actually looks really good.

So much happened in just this first episode it’s hard to talk about it all, but the big thing to talk about is Vandal Savage himself. Interestingly enough Vandal Savage is currently the main villain in a major Superman arc that’s been crossing over most of his titles. In the story we see that Savage was a man who was denied power, which he thought he was worthy of, when he was younger. However it was his fearlessness that lead to him receiving immortality, and now he travels across the ages finding places that are worthy to have him as a leader. However most fail to impress him, and they end up having a painful end.

He’s been portrayed in the recent comics as highly intelligent and sophisticated, yet when he doesn’t get his way, well he gets a little bit savage.

From what we’ve seen of TV’s Vandal Savage so far, he seems like a real threat. But I hope they explore his character a little more, and really get into his motivations. Because I get the whole jealous lover thing, but I would like to see a little more complexity from him. Which I’m sure we’ll see considering the whole show is based around him.