4 Things 2016 Taught Us About The Comic Book World 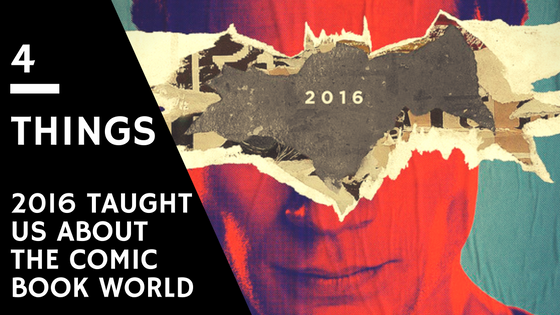 It’s hard to believe that we’re about to enter the year 2017. The year of a new Spider-Man, Justice League and more. But before we get there, let’s take a look back at 2016 and what came out from it.

Being too serious/not fun enough is not the problem

Since the DCEU kicked off their universe with Man of Steel, a big point in conversation has been the issue of tone in comic book films. Whilst Marvel is more known for their lighter films, DC was known for their darker tones. And so started the debates. What’s better? Lighter films or darker films? People had their preferences and were sure as hell stubborn about it.

Many thought that if DC became lighter, their films would become better. Now personally, I loved Man of Steel and Batman v Superman Ultimate Edition, so I wasn’t part of the party who believed this. But many were looking forward to Suicide Squad because of its change in tone. Many believed that DC was so critically bashed because they didn’t take a lighter tone. So when Suicide Squad came out with its lighter tone and wasn’t critically praised, it showed that tone wasn’t the only thing critics were looking at (whilst that’s obvious to most of us, a lot of people think that’s the reason critics have an issue with the DCEU).

2016 was definitely a stronger year when it came to female representation in comic book media. The main standouts included Wonder Woman and Jessica Jones. Although Wonder Woman wasn’t as significant of a character as Batman and Superman, she still shined in Batman v Superman. She was also definitely a character people came out loving after watching the film.

What was especially great was that her merchandise was selling out. Obviously this is a good thing, with her solo movie coming out next year. From what we’ve seen so far, people are loving that as well. She’s an interesting character. A symbol for peace yet a great warrior. She originally joined mankind to protect them, but now she has lost most of her faith in mankind. People are interested in seeing more from her and other female characters such as Harley Quinn and the other Sirens in upcoming films.

Marvel also did a great job representing more female characters in their media. Of all of them, my personal favourite from the year has been Jessica Jones. Sometimes it feels like creators are scared to give female characters flaws. With that ideology we are often left with empty characters with little relatability or sense of connection. What was great about Jessica Jones was that they weren’t afraid to showcase the good, the bad and the ugly. We didn’t see the embodiment of female perfection. Instead we saw a woman struggling with her past and her sense of purpose. Again the show was a success, and garnered an overwhelmingly positive response from fans and critics.

Of course 2017 will really be the big test as to whether females sell in comic book media, with Wonder Woman premiering. Interest is high in the movie, the trailers and posters have looked great, so far so good. The main concern is that it is coming out in June, which is a pretty competitive month for movies. It’ll need a good critical reception, and positive word of mouth to be able to remain competitive with all the other big movies coming out during that time

DC and Marvel can remain competitive without one dominant ruler

When it came to comic book sales in the last few years, Marvel was king. They would always dominate the market share, with DC trailing in their shadow. This year things changed a bit with DC’s Rebirth initiative. The market became competitive again, with DC being able to take top spot. Now this didn’t last forever, and Marvel is back at number 1 (with all their constant number 1’s), but it’s good to see that DC is still able to compete.

Things can get boring if one company continues to dominate, and the rest give up. And it also means it would allow Marvel to get complacent. Now that they know its not as easy to stay number 1 in the market, we’ll hopefully see new quality initiatives coming out of Marvel.

And we’re starting to see this healthy competition in the live-action universe as well. We’re seeing a big dose of both Marvel and DC on television, both with their hits and misses. And of course we’re finally starting to see regular DC stuff on the big screen. Now we know that critically the DC films aren’t doing as well as Marvel. But financially they’re doing pretty good. Yes they would have probably performed better had there been a better reception, but they are still making good money. What’s important is that DC is actually establishing a shared universe to compete with Marvel, and even though they are still going through a bit of a learning curve still, they are trying.

Too much comic book stuff isn’t a problem…yet

Building off the previous point, 2016 had an explosion of live-action comic book properties. It’s a bubble people are afraid will soon burst, but even after the 6 films and bunch of TV shows this year, it’s still going strong. Most of the comic book films exceeded box office expectations, and the majority of the comic book TV shows are still on air. The popularity of the superhero genre continues.

Obviously, this superhero bliss won’t last forever, but coming out of 2016 it still thrives. Audiences are still open to exploring more from this genre from characters they know and don’t know of. But you know studios can’t churn out any old crap and expect audiences to eat it up. The level of quality of these properties will determine how long this trend lasts. So here’s looking to DC, to bring out a critical hit next year.

Overall it’s been a pretty good year for the comic book world. Here’s hoping 2017 is even better!