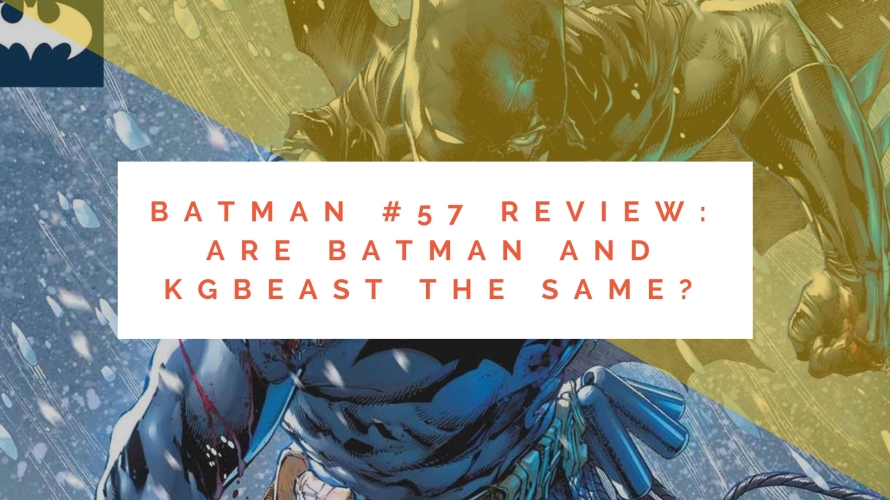 Batman #57 brings the conclusion of the Beast of Burden story arc which has unfolded the last few issues. And whilst the arc started strong and with a lot of potential, the ending left open a lot of questions, but at least we got to see a nice showdown (and delved deeper into the minds that are Batman and KGBeast)!

Non-Spoiler Review: Beasts of Burden kicked off with a trip down memory lane, looking at the original dynamic duo, Bruce and Dick. I love Dick Grayson, I love that he has the skills and abilities of Batman (perhaps not to the same extent) but is still able to have fun and stay on the lighter side of things. They provided a perfect complement to each other.

In Batman #55 we finally see Dan DiDio’s dream come true, Dick Grayson gets shot in the head. Batman #57 sees Batman meet with the assassin, however the issue was mostly them punching each other. The ending doesn’t seem satisfying in comparison to the strong build-up. Because although Bruce may have trouble saying this out loud, he loves Dick Grayson, Grayson is like a son to him. There is a strong emotional weight that comes with the events that have just happened. And although we see see that emotion exploded onto the page physically, it just doesn’t feel like enough. The mystery isn’t resolved, but hey, maybe I’m just greedy.

Like I mentioned earlier old mate Dan DiDio has been itching to kill off Dick Grayson for a very long time. I personally can’t imagine a DC Universe with Dick Grayson dead. Dick Grayson is the heart and soul of the Batverse, and one of the original characters from the very start of the DC Universe. So in Batman #55 we see that Nightwing is shot through the head. Now we know that he survives, Nightwing #50 picks up the story and shows the aftermath of this. I’m not sure that I’m loving the direction this is taking, it feels more like a Jason Todd story arc than a Dick Grayson story arc. Now remember it wasn’t too long ago that we had the whole Nightwing has to pretend he’s dead so becomes a secret spy story arc. Now we’re back to, he’s not really Nightwing anymore so who is he, story arc. But as normal, we need to wait and see how this will play out, it could be a great character developing arc for him!

Moving on from that, the following issues we see Batman track down the killer, KGBeast. What’s been interesting about Beasts of Burden, is the father/son angle it’s been taking. Dick is like a son to Bruce, all of a sudden his son is in trouble. Then you have KGBeast who goes and tracks down his dad. It’s not exactly a happy reunion, his dad seems hard to please. Then in Batman #57, the story is anchored around a father reading a tale to his son. At the start we see KGBeast’s father reading him the story, and at the end we see Thomas Wayne reading the same story to Bruce.

The father reading the son the tale is weaved throughout the main story arc, Batman facing KGBeast. It is an incredibly violent and merciless confrontation. Let’s face is, Batman is intense when he’s in a normal mood, him in a bad mood is a whole other ball game.

The tale the fathers are reading their children goes like this: a group of adorable animals are off to St. Petersburg to pray to god. Before they get there however, they fall into a pit. They have no way of getting out, so in order to survive they decide they need to eat each other, so they have singing competitions to decide who gets eaten first. We then see these adorable animals get torn to shreds, with the fox outsmarting them all to be the last one standing. Does he himself get out of the pit? We don’t know.

But how is this incredibly disturbing children’s tale relevant to the story? At the end of Batman #57 Batman destroys KGBeast, KGBeast pleads with Batman, if you get me help I will tell you who hired me to kill your boy. Batman then proceeds to tell KGBeast that he is the world’s greatest detective so that offer is meaningless, bye (felt like something Affleck Batman would say).

It’s been instilled on these two men at a young age that survival comes at a cost, it’s not going to be pretty. Now they are numb to it. Numb to the idea of hurting someone else if it means surviving yourself. Numb to the idea that just looking out for yourself will leave you left outside in the cold alone. Is that really the best way to survive?

Sure the fox in the story survived longer than the other animals by tricking them, but was he really better off? Maybe if he played nice and got them to work together they would have all made it out there alive? Are Batman and KGBeast the fox in this story?

So Batman #57 still leaves us with a lot more questions, we don’t know who hired KGBeast and why they wanted Nightwing dead. But we did get to see a great physical showdown between Bats and the Beast! Overall though it would have been nice to get a bit more from this issue, but I’m guessing this is just the start for something bigger. Hopefully what ever King is planning plays out nicely, and makes this lead up all worth it!   Batman #57 spoilers review

But what are your thoughts on Batman #57? Do you think the story concluded well? Let me know in the comments below!

If you like GirlonComicBookWorld and would like to help the site keep its lights on, you can head HERE to make a contribution, anything is appreciated! 🙂